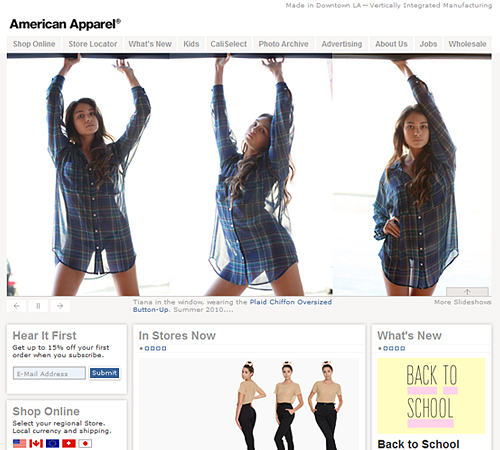 As of August 20th, 2010, American Apparel stock is down to about $.75/share. News stories are being published all over the world about the possibility of the company going bankrupt. The company started in 2003 and prides itself on producing all of its designs, dyeing, knitting, sewing and distribution from downtown Los Angeles since day one.

Most of the articles that report this story will mention the acts of the CEO (Dov Charney), and the company’s sex themed marketing. You will not find many articles reporting about the atrocious conditions that other companies maintain in overseas factories, and how American Apparel manufactures their clothing in sweatshop free factories in LA.

The LA-based company‘s shares, which touched $14 in 2008, at the height of the so-called “hipster revolution”, were trading at an all-time low of 75 cents at close of play on Friday, a drop of almost 50 per cent over the past week. It now has debts totalling $120m, and has admitted that it is currently losing money at a rate of nearly $30m a year. –The Independant

Mr Charney’s defenders point out that he is progressive with regard to his workforce, paying factory workers up to $20 an hour, well above minimum wage, and describing his clothes as “sweatshop free”. He also gives staff health insurance and paid holidays. –The Independant